Here’s the blog where you get the latest dirt, dish, and gossip — all from anonymous sources! — and all about Parmalee, VT.

TOWN SPLITS DOWN THE MIDDLE:

By An Anonymous Source

PARMALEE, VT ———– In an historic vote, Parmalee citizens voted in equal numbers for the two Presidential candidates in the recent election. Town Clerk Rose Fawcett confirmed the numbers early this morning after a fifth recount.

“It’s the only town in the entire country that had this result,” she said.

Town transfer station supervisor Jerry Borden says he isn’t surprised. “I base that on the number of discarded lawn signs I saw after the election. Pretty much 50-50.”

“Kind of figures,” Borden added. “People in this town more or less cancel each other out.”

PARMALEE, VT ———– Parmalee Road Dept. worker Wayne Robey drove the town grader into a ditch today, seriously damaging the machine but suffering no injury to himself.

The only other casualty might have been his Pokemon score as he admitted to Parmalee Police Chief Karl Parmalee that he was playing the popular phone game while he was driving the rig.

“I was going slow,” Wayne is reported to have said. “You can’t go fast in that damn grader anyways. Figured I’d, you know, have a little fun. It was a Friday.”

Road Agent Lyle Robey said that Wayne will not be suspended from his job but will be required to leave his phone with Chief Karl whenever he is driving town equipment.

Repair costs to the grader have yet to be determined, Lyle said.

PARMALEE, VT ———– One of the happy signs of spring around here when the snows depart is the return of the smiley face made of tires on Keller Parmalee’s manure pile out on Rt. 24.

Well, this was the sight that greeted farmer Parmalee on a recent morning.

“Smiley was gone,” Mr. Parmalee said. “I took a picture with my new iPhone.”

Mr. Parmalee has “not a clue” as to who might have destroyed the iconic handiwork which he applies every year to his manure pile.

Residents can rest assured Smiley will be back. Mr. Parmalee vows to reconstruct the happy face. “At my earliest possible convenience,” he said.

PARMALEE, VT —— The Parmalee Outing Club is proud to announce the completion of the new observation tower (at left in photo) on the summit of Mt. Parmalee. 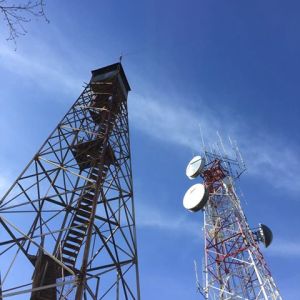 Built entirely from scrap metal and freight pallets, the tower provides an excellent viewpoint and “vibrational receptor” for the nearby communications tower that sprung up on the summit of Mt. Parmalee LITERALLY OVERNIGHT. Literally. In a single night. About a year ago. Imagine that, readers…

Anyway, the POC (Parmalee Outing Club) urges you to go for a family hike up to the summit for a look-see. Leave your credit cards, cell phones, and anyone with a pacemaker at home.

by an Anonymous Souce

PARMALEE, VT —— It’s that time of year again, folks. Chores from before last winter are staring us in the face. Time to clean up the yard. Then, go out and spread excrement from grazing animals all over the yard you just cleaned up. Doesn’t make much sense, does it? Well, what around here does? Makes you kind of wish our ancestors had thought things through better before they first settled in this damn place.

No use complaining, though. Summer will be here soon enough.

Check yourself for ticks.